The place to hang out and talk about totally anything general.
Post Reply
3996 posts

lets recreate that crash test on a computer
and in the process, outdating the actual crash test itself
Top 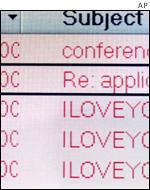 Some now herk as Faith


Me fail English!? That's unpossible!
I think you left out a "k" somewhere...

Uplink help: Check out the Guide or FAQ.

How does that beat faith?

I have no idea. She looks human. So I decided to blow her up.
Top

Ahtykk wrote:I have no idea. She looks human. So I decided to blow her up.


1) I am fairly certain that god, nukes, and fire are off limits, unless you can specifically justify them. A cruise missle, I think, fits that category.
2) "She looks like a person" is not a good enough reason to blow her up. I would suggest that you learn something about her, or the picture that she was a response to. She represents Faith, the anit-virus used in Uplink to destroy Revelation. You could use that track. You could recognize her from her television show, and kill her off with a vampire. Or, you could assume that she represents the idea of faith, and taker her out with Friedrich Nietzsche.

Sorry. I didn't know who she/it was
Top

a refill kit
GENERATION 22:The first time you see this, copy it into your sig on any forum and add 1 to the generation. Social experiment.
Top
Post Reply
3996 posts