Does anyone know if there is any specific yield of the nukes in defcon based on the damage they inflict or whatever.
Top

The blast range is not realistic and neither is the blast damage but if I were to guess it would be in the high 10+ megaton range of nuclear weapons.
Top

All nukes are identical. Damage: it is, or it is not - there is no other gradation of it.
Top

Laika_rus wrote:All nukes are identical. Damage: it is, or it is not - there is no other gradation of it.

Yeah, but I think he's asking what yield the nukes have, not what different ranges of nukes there are...
Top

Sorry, I misunderstood the question.

Even if you take into account that "average" nuke yield is not a clearly defined constant, it looks like there are no regular nukes IRL capable of destruction that we see in Defcon.

upd: The most powerful nuke ever made has radius of destruction of 35 km (=70 in diameter); not even close to Defcon nukes.

Laika_rus wrote:... it looks like there are no regular nukes IRL capable of destruction that we see in Defcon.

Sharp analysis. So, in terms of yield, you are saying Defcon nukes are ~ thirty times as powerful as the average real life nuke. Not big enough imo.
Top

It takes 9 missiles to destroy a population of up to 25.6 million (big cities) but in real life most Missiles are not just one big powerful warhead but several including chaff and decoys like the minuteman here: 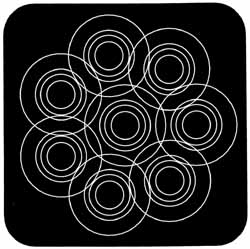 (it takes 8 nukes to zero a 10m city in game) assuming each ones a minuteman "cluster" of 6-7 nukes all aimed at once perha\ps that would create a blast radius of 450km??
DEFCON is probably not a very accurate simulation of REAL nuclear war lets not forget in the cold war USA and Russia had THOUSANDS of warhead's pointed at each other not just 232 like game.
Heres some more Info here about Real life nukes and how many it would take to destroy the whole world: http://www.informationisbeautiful.net/2 ... -the-bomb/ - http://gizmodo.com/5899569/how-many-nuk ... ire-planet
Top

... a limited exchange between India and Pakistan [50 (small) Hiroshima sized nukes each] ... could kill up to a billion people worldwide [global famine] ...

big war between U.S. and Russia ... period of three years throughout the temperate zones of the northern hemisphere where there would not be a single day free of frost, meaning basically agriculture would stop ... might be small bands of humans that would survive

This should put a jolt into you: http://www.theatlantic.com/technology/archive/2012/12/furtherance-the-cold-war-plan-to-launch-a-full-on-nuclear-assault-if-the-president-were-killed/266291/
Top

eh' MAD kept them in line. No one would have actually implemented this plan.

When in doubt, fire back.
Top

Well i understand the blast radius is not realistic especially when you have one taking up the whole of France, but based on the population killed what would you say, because the large white blasts are simply for effect, no one is going to pay attention to a tiny white circle. I think that the weapons would have to be on the higher side, around 5-15 megatons, because if you dropped a 15 megaton bomb on New York City on top of the empire state building during rush hour or the middle of the day around say 12, I think that you could kill 12 million people with a powerful nuclear weapon. I have just never seen the topic discussed. Perhaps that could be a goal of the Defcon game developers. The United States most power warheads are actually on their trident II missile system with the Ohio Class Submarines, not on the Minuteman III. Our most powerful gravity bombs and nukes in general are on our bombers, also known as the B83, which would be the most likely bomb for the United States to use against Iranian nuclear facilities because it is bunker buster capable, I will now stop rambling about random stuff.
Top

Here's Bravo's scenario. You could do an intersection with a population layer and get an approximation to Bravo's number.

Ha, detonate the tsar bomba in tims square and the fireball itself will extend out 5 miles about half way into central park
Top

and the thermal radiation radius would wipe out just about all of the island, (not long island but the main newyork downtown)
Top

and compared to the bomb blasts in defcon it would have to be a 1 gigaton weapons, also known as 1000 megatons, or 1000000 kilotons
Top
Post Reply
22 posts