by arwan
so i have a legendary inmate, my first in this prison. he is not a gang leader though. and im thinking he really should be on death row. he is crazy insane. all he knows to do is kill guards LOL. if he were a cat he would be this cat

here is a few pics of my worst offender. 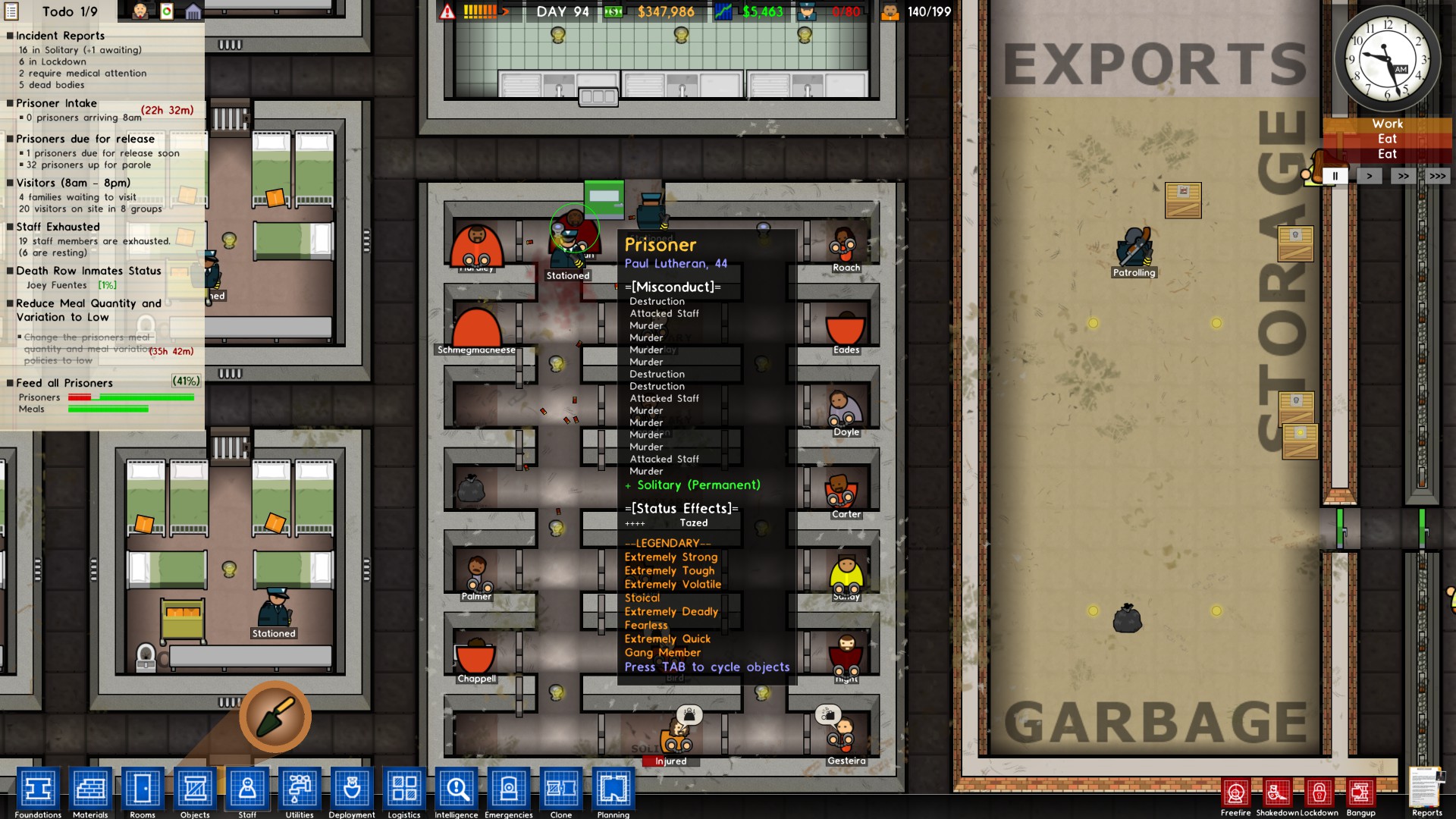 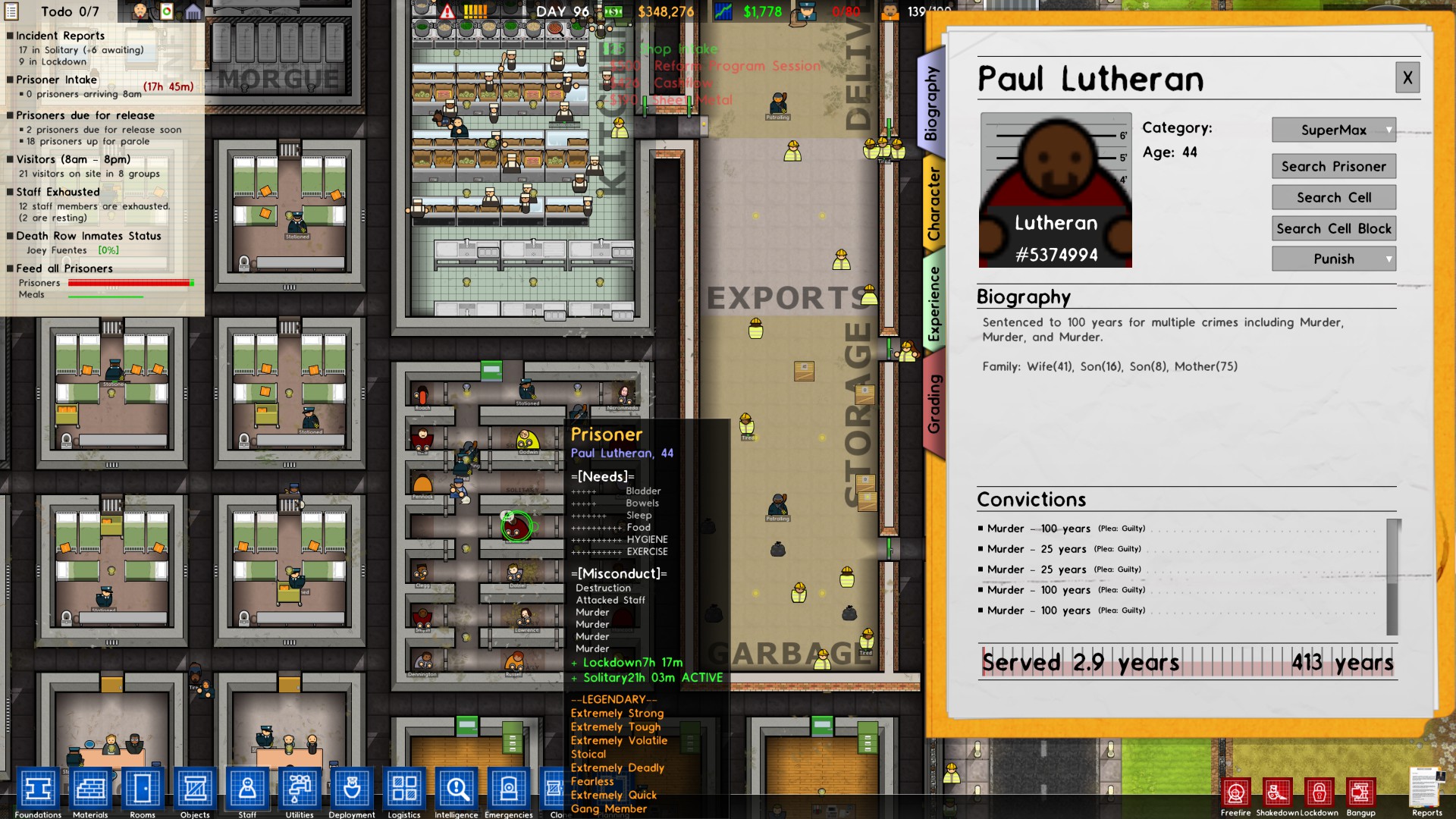 if there was ever a way to put someone on death row i would have my first person in line here LOL.

by rgargvanshu
WEl....there is a really cool mod for changing prisoners to deathrow(clemecy will only be 0), adding gang member , add geand leaders etc etc etc!!
Heres the link to this :
(http://steamcommunity.com/sharedfiles/f ... earchtext=)

by ragerancher
I had a legendary inmate just like yours. Must have done something right though because he was good as gold and got out on bail without ever having any misconducts (literally, none). He has been my only legendary and it was actually kind of underwhelming

ragerancher wrote:I had a legendary inmate just like yours. Must have done something right though because he was good as gold and got out on bail without ever having any misconducts (literally, none). He has been my only legendary and it was actually kind of underwhelming

Sometimes they are demon spawn.

Sometimes they are princesses.

Sometimes they start as one and flip randomly to the other. When the princess goes on a murdering spree, well...

by dogsbody
I had a legendary prisoner who (after inciting a couple of mini-riots) had a sentence of 249 years - decided to only sane option to prevent him clocking up more time was to create a solitary cell for him on the other side of the map and let him escape.

by moosegun
Got one of my current crop of 4 ledge who got 67 hrs solitary after one riot, another who has only been out of solitary for about 6 minutes, he literally come out, kills a guard and goes back in. Will take some screenshots. 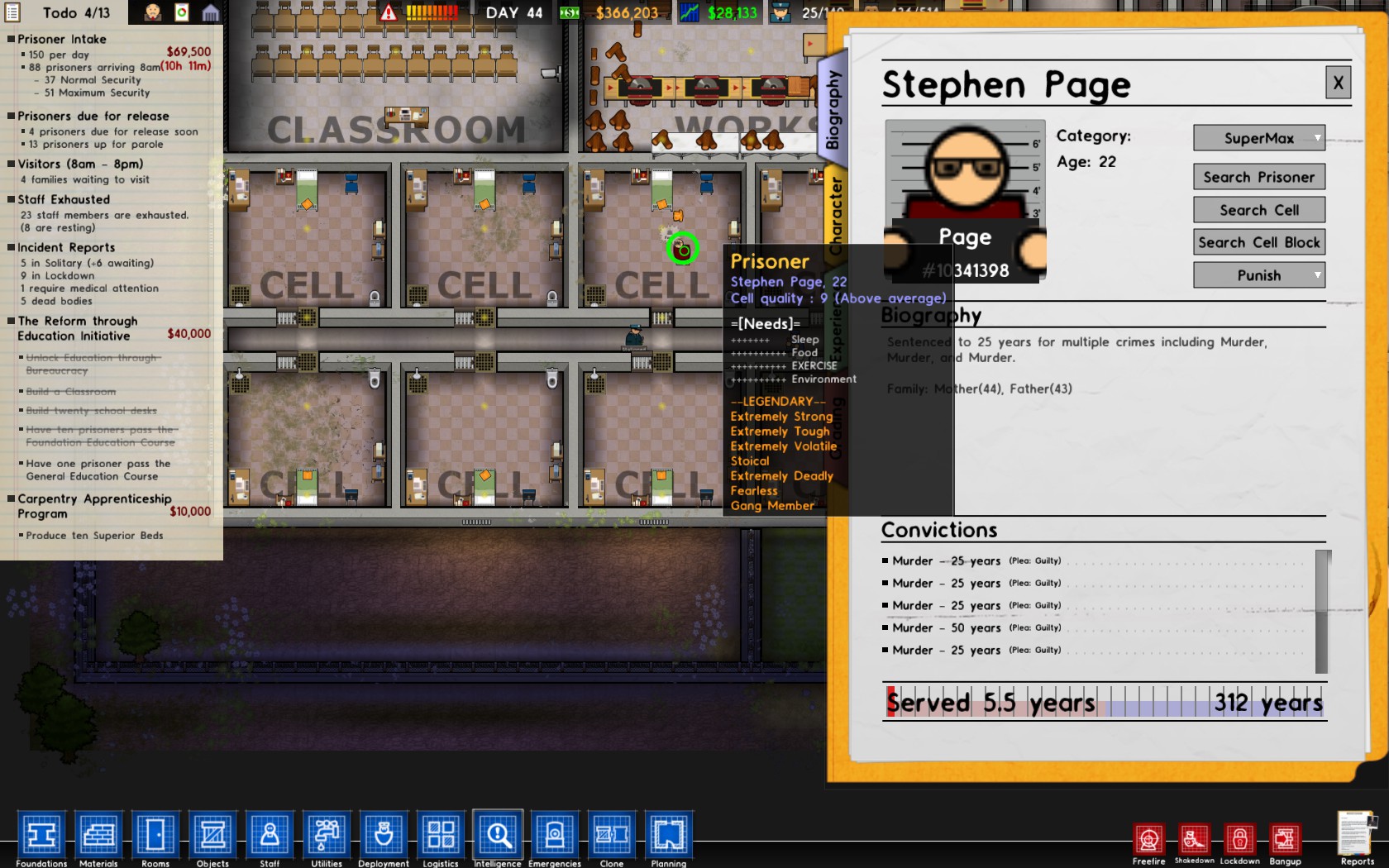 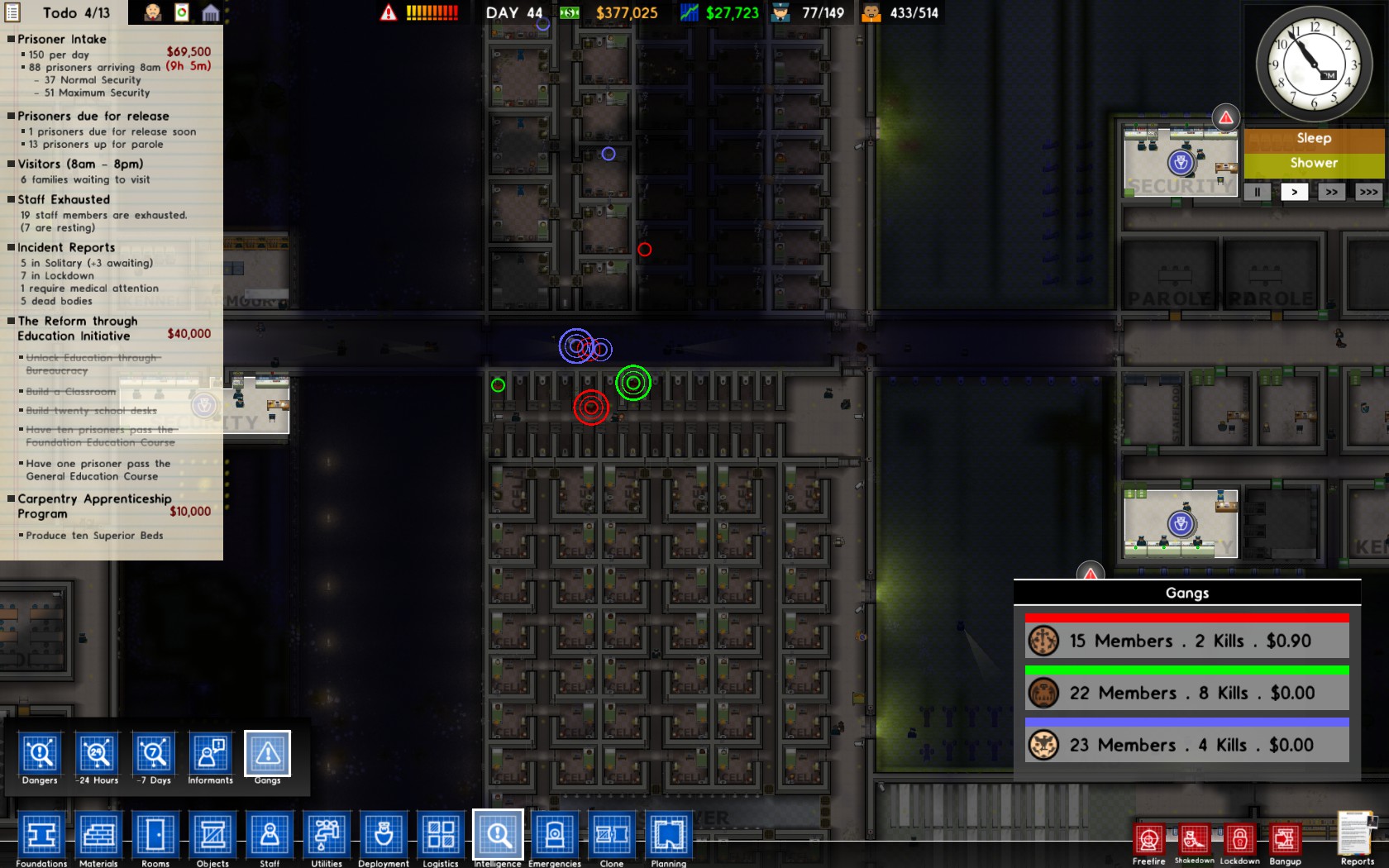 They are doing what they do best.... sitting in solitary

by WyDavies
I have no idea how to resize images from Steam, so unless you have this at high resolution you won't be able to see the full "augmented inmate containment mechanism" (the path opens out onto the outside where 5 armed guards are waiting with "shoot-to-kill" in effect.
However, this guy survived every time. He kicked off at least once every 2 days, murdering everyone in sight and even with a corridor of death I wasn't able to get rid of him. At this point his sentence was at over 500 years, but at least the "augmented inmate containment mechanism" put a stop to that. The sequence was - sit in cell for a few hours, spot open route, escape attempt, hail of bullets, instantly unconcious, infirmary for healing, take back to cell, repeat. 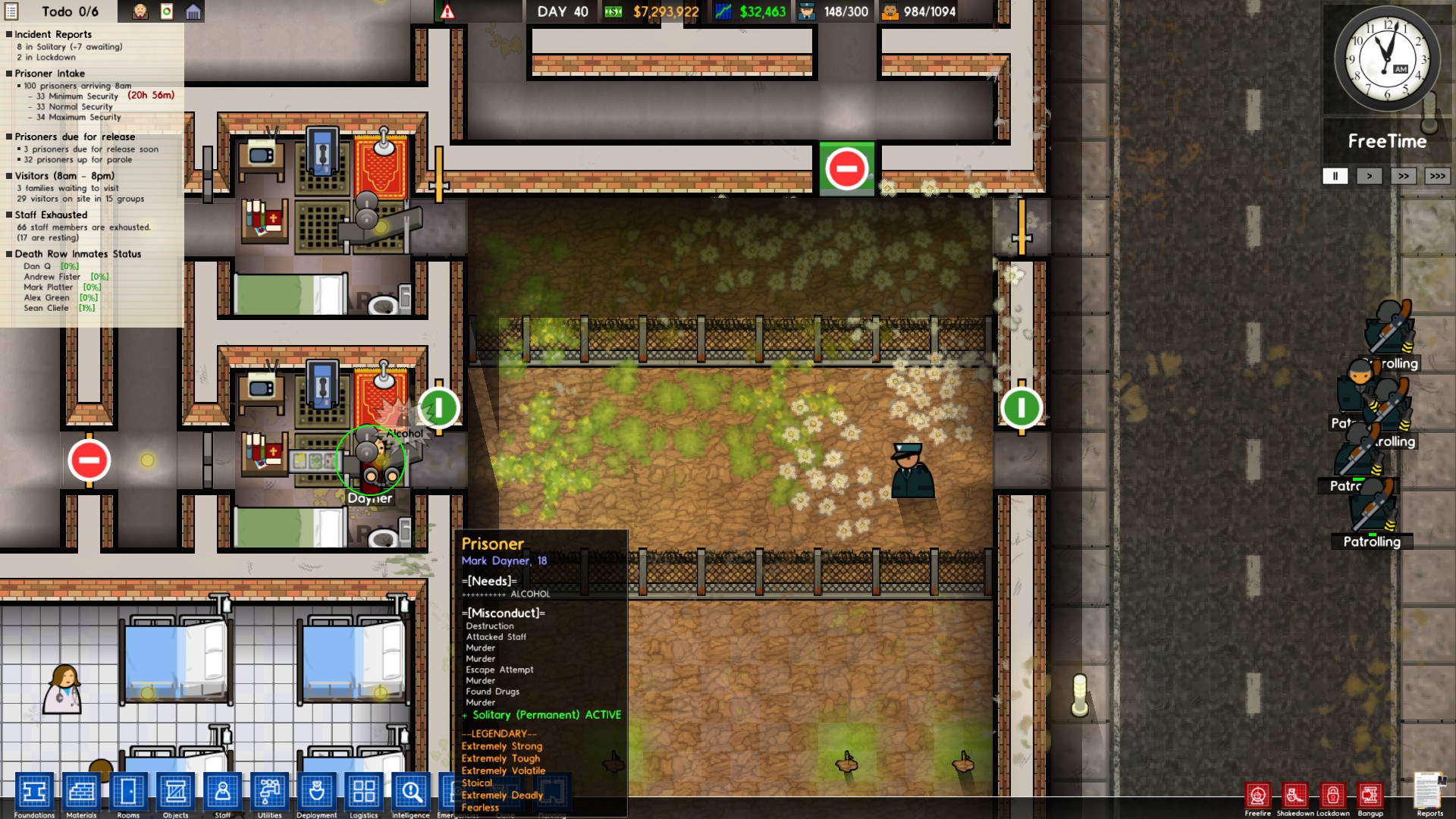 He seems to be involved in each and every riot I have observed, both accidental riots and those I purposefully triggered (for experiments or to kill off gang members).

Never directly singled out for weapons or murders. Maybe he's the true leader of all three gangs.

He sadly was shot to death while trying to break out of a canteen during a riot lockdown.
All times are UTC+01:00
Page 1 of 1
Powered by phpBB® Forum Software © phpBB Limited
https://www.phpbb.com/