Talk about your new mod or map here

In recent years nuclear physicists have discovered a strange world of sub-atomic particles.
Fragments of atoms smaller than the imagination can picture.
Fragments of materials which do not obey the laws of gravity.
Anti-matter composed of inside-out material.
Shadow matter, which can penetrate ten miles of led sheathing.
Hidden deep in the heart of strange new elements are secrets beyond human understanding.
New powers…new dimensions.
Worlds within worlds…
Unknown. 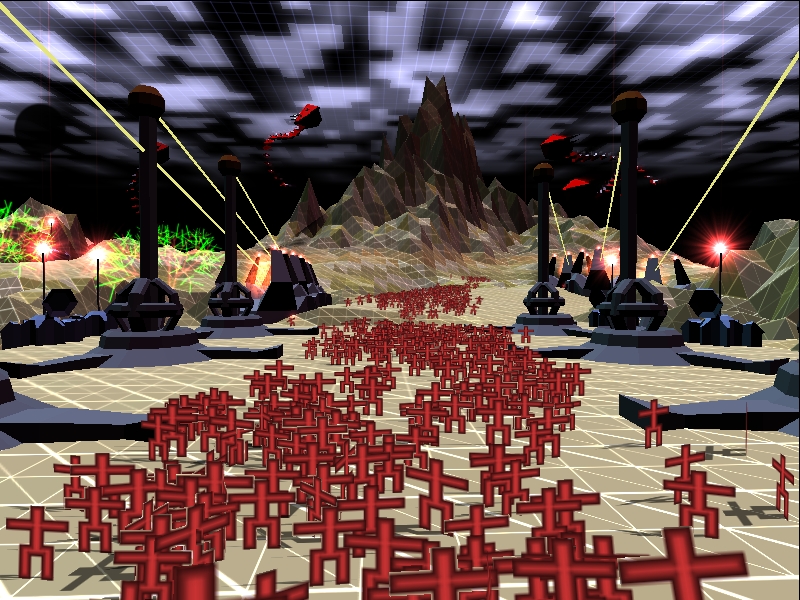 For those using Vista and Win 7 place Mod maps in this place...
C/Users/yourname/Saved Games/Darwinia/mods

The map order is Nucleus, Neutrons, Protons, Electrons, Gluons, Quarks, Angstrom, Positrons, Hadron and Lepton. The next set is underway. Any comments are greatly appreciated as it only makes better games for everyone. If anyone has any mission ideas or would like to help on the development of this Mod, let me know.

The story takes off from the launchpad on demo two. During the last invastion at the Launchpad, a platoon of the red army, stowed away inside the cargo hold of the rocket. Before the group hid away they were busy sabotaging the rocket. When the group looked through a portal window, they saw squads fighting back on the launchpad...they hid away. Halfway along the Darwinian's jorney, the rocket developed trouble, caught on fire and a forced landing was made to the nearest system. It was their only hope. After the landing, one dark night. The red army troups slipped away...Only to return later in greater numbers.


Now Updating to version 0.15, the finish of part one to The_Particles_Within
...Here Is The Latest Version...

7.3mb !!! ? I hope this (currently downloading) file has got a whole glut of new models and sounds in it...

edit// ok, dump the music files. They'll play from the main games files i believe. You don't need them in the rar.
Top

those are music sound files from the game. I can add new ones though. I liked their intro music on the camera intro walkthroughs.

The music wouldn't play unless I put the files in the sound folder. I was hoping it would pick it up from the game files but it didn't. So they have to go in their own folder in the Mod dir.

I am working on some new models though, now that you mention it. Some static buildings, I am about to look into the animated buildings they have. I would like to have some with the same type triggers and sprites. I have Max 8 though. I still may be able to get them into what I need. I am just now digging into that.

I do have a big sound library from Q music that I can even publish. I think there is some spacey music I might be able to use. Maybe by the next update.
Top

well if they will play without them I will remove it for sure.

I'll rezip it and repost it. Try it and let me know.

edit// okay I removed the sounds folder. The script should pick it up from the game files I hope.

I am on my way out the door to work, and will not have a chance to play it for a bit, but shouldn't it be "particles"?

As always some spelling and grammar problems. Starting playing, the intro certainly looks good. Didn't have enough time to play properly and finish the level.

Frankly you can't go wrong with a Physics based mod, I'm getting a hadron just thinking about it!

It almost makes me want to bother to finish my Maths mod, but that would require too much effort.
Top

yes I am still developing the storyline. During construction I had to make a few big changes to a couple of the levels. I hacked at the text and need to go back and rewrite the scripts
Top

Those levels are really big! Some of the biggest level i seen! Some of the levels you enter, the speech appears at the bottom.
Top

I hope large maps aren't too much trouble. I do like huge landscapes. The next maps are more mid sized like the protons map.

I did note a mistake on the first level Nucleus, I had moved the spam to a better location. It needs to be set Global and Dynamic or it will reappear after you leave and come back into the game. I made the change and re-posted the maps. http://www.crimsonsun.cc or you can pull it up in the editor and go in and click on it and add those as well. Sorry about that.
Last edited by Lowell on Mon Feb 27, 2006 9:51 am, edited 6 times in total.
Top

If you are going to make really big maps, you may want to reduce the cell size by a bit. You lose some detail, but it will render without bringing systems to a halt quite as fast...

can I adjust it now, or do I have to start say at 10 at the beginning?

I also noticed I failed to connect building control tower number 77 to radardish number 76 on the neutrons map.

Lowell wrote:can I adjust it now, or do I have to start say at 10 at the beginning?


You can adjust the cell size at any time you like.

The protons map is more mid sized. The next set is more that size.

edit// however I am open to changes, that's why I posted it. In Nucleus the ant area is an add-on "it's cool to get up top and drop AirStrikes down onto them", it could be removed as well as the far transport island, that would speed it up a tad. The first version had three triffids and two spams. ...way too busy...
Top

I had to do a repair on the second map. I have fixed the mission objectives and stopped the refinery from starting up until secured by the Green Darwinians.
Last edited by Lowell on Mon Jan 30, 2006 10:35 am, edited 2 times in total.
Top

Could you use some version numbering please. So downloaders know what they are getting and listers (like me) know which is the latest version...