The place to hang out and talk about totally anything general.
Post Reply
2549 posts

I think they were cooler when I lived on the ground floor. And played them on a Playstation.

I guess I could just ignore them and consider myself lucky that the female gamers I know are totally cool with the idea of dancing games?

There's a special hell for you and it's called the Friend Zone. Enjoy your stay; it'll be very long.
Dear IV, please make the columns line up.
Top

Shogun 2 is out \0/ anyone here getting it, picking one after work.

resolution @ 1280x1024 and its running SHOGUN2 without any trouble yet

You better have a killer cpu then.
Top

So, Atom Zombie Smasher is an... interesting game.

I'm enjoying it, but the game is a bit hit or miss. This might, in part, be a result of a lot of game rules never being explained, requiring several play throughs to get a good grasp on the game (as a result, the first campaign I embarked on turned out to be a sizeable disaster.

You are in charge of fighting a zombie outbreak in a Latin American country, 50's era (though with some alt-history weird tech). The overall goal is to reach a certain number of victory points before the zombies do, and you gain these points by going on missions to infected areas. As you carry out missions you'll be able to hire mercenaries (infantry, artillery, combat engineers, etc), and each month only a few of the groups you hire are available (thus requiring you to tweak your strategy- ie, you might not want to take on a mission in a heavily infected area if you won't have artillery support). You get to name these units whatever you want, and as they gain experience they can earn upgrades.

The goal in the missions is to either rescue as many civilians as possible, or to exterminate the zombies before all the civilians are evacuated/killed. Each mission takes a top down view of a city, and before the mission starts you deploy your units and assign a pickup zone for your helicopter. This is one of the most important parts of the game, as you can see where the zombies will becoming from, so you need to figure out how to keep the civilians safe by limiting the zombies access routes, establishing good kill zones at the choke points, and etc.

Once the mission starts, you can order your mercs around, and start calling in support strikes. Be careful though, all the buildings are destructible, so you want to avoid blowing up buildings that allow the zombies better access, and you want to avoid blowing up your own guys. Once either everyone is evacuated or dead, the mission ends and points are tallied. The campaigns are pretty tough, at least they seem to be (again, I'm not entirely sure that my campaign strategy is the best since goals, ramifications, and such aren't documented well), but it's pretty addicting gameplay.

The music is great, with an upbeat surfer guitar accompanying the mayham. There is also a weird story going on that is played out through unlockable vignettes (I don't know how to unlock them, they just sorta happen as far as I can tell, again, documentation...). And when I say weird, it is VERY weird. I have no idea what it means, but it involves a viking, a devil baby, an assassinated dictator reanimated as a killer robot, and Eisenhower voice overs. I really, really don't know what it's supposed to mean, but whatever.

I'm having a lot of fun with it though, despite it's faults, and I've got a feeling that once I really get a good grasp of things that it will be even better. I recommend it!

I have to second what Feud said about Atom zombie smasher. It's a bit of a weird game, and as he says it's not exactly very well explained, but it's pretty addicting.

Apparently it also has some kind of co-op mode, anyone who has the game interested in a few rounds?
GENERATION 22:The first time you see this, copy it into your sig on any forum and add 1 to the generation. Social experiment.
Top

Update: Had an awesome Blackhawk Down/We Were Soldiers moment while playing. We had staged a fighting retreat to try and give better cover to the civilians as the zombie hoard grew. We were using a "T" intersection as the evac point, with two infantry squads on the ground. There were about 120 needing evac, but the helo could only hold 30 at a time. As the chopper made run after run artillary was used as a steel curtain, with riflemen picking off survivors. It was a nail biter, but just as we were about to be overrun the last civilian got on board and we extracted. Very, very fun game! (I play it at a slower speed than what the video shows, makes it a bit more tactical.)


If we can figure out how to do multiplayer, I'd be happy to give it a go.
Top

Apparently it's local multiplayer only

I've been using Multiwinia to demonstrate a ranking system for my dissertation. I've got nearly everything I needed done so I decided to explore some of the more interesting sounding bits of turned off code, like some disabled crates. Erm: 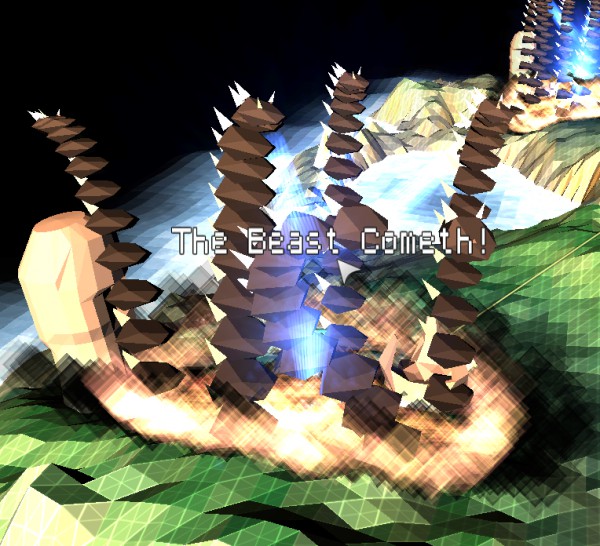 "The Beast" appears, destroys everything around it, then after (quite) a while disappears but not without first exploding and setting everything vaguely nearby on fire.

Also, tanks are awesomely crazy, but until you change them so there are different buttons for move and shoot they don't do much other than blow themselves up.
Top

You can blame Icepick for The Beast! He's all types of crazy!
We dont stop playing cos we get old... We get old cos we stop playing.
Top

if any of you know autechres gantz graf music video, this game reminds me of it
Top

elDiablo wrote:You can blame Icepick for The Beast! He's all types of crazy!

Hah! Is there anything else lurking in the source of this level of barmy?
Top

elDiablo wrote:You can blame Icepick for The Beast! He's all types of crazy!

Hah! Is there anything else lurking in the source of this level of barmy? From the still image, it looks like a very detailed point-and-click adventure game... I definitely did not expect that awesomeness.
Top